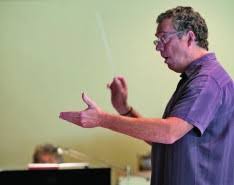 A beautiful spring Mother’s Day afternoon in Carmel Valley at Hidden Valley Music Seminars was a perfect setting for the Camerata Arts in Harmony Gala. This annual event benefits the Camerata Futures Program. High school students have the opportunity to be mentored by adult singers and perform works not readily available in local programs. Jeffrey’s of Mid Valley catered his famously sumptuous treats and wines. With an artful array of silent auction items as well as a live auction during the music portion of the afternoon, attendees were enticed to bid. And the music portion was again creatively programed by John Koza, artistic director and conductor.

Opening number, Gitanjali Chants, was the poetry of Rabindranath Tagore sublimely set to the music of Craig Hella Johnson. The ethereal quality of the women’s drone as the tenors and basses chanted was so beautifully balanced then parts switched without losing the quality. This was definitely a sit back and let the music flow over you moment. From an early age, Alice Parker had an intrinsic sense of voicing choral music. Her early work with Robert Shaw honed her already innate skills. Programming one of her arrangements is a sure winner especially handled by Koza and his chorus on Hark, I Hear the Harps Eternal. An additional treat was next on the program with The Water Is Wide with not only Pauline Troia’s fine piano accompaniment work, but also Amy Anderson on cello. This second arrangement by Craig Hella Johnson was eloquent and absolutely delicious to hear. Emma Lou Diemer’s version of She’ll Be Comin’ ‘Round the Mountain was definitely NOT the usual elementary school fare. This was an absolute rhythmic rib tickler! Tenors and Basses followed with Pretty Saro, an Appalachian folk song set by Mark Keller to great effect. Daniel Kallman’s Glorificamus Te not only had the traditional Latin text but was interwoven with an ancient Irish prayer. The underlying piano support painted it’s own picture recalling gentle wind, rolling water and the steadiness of a grateful prayer. Again tricky rhythmically for the chorus but no speed bumps and solidly sung.

As if the regular programming were not terrific enough, John pulled a delightful surprise for the audience by having Symphonie Constant reprise her solo from an earlier Camerata concert. Symphonie, one of the Camerata Singers Futures students, again sang the Patty Griffen Up To The Mountain with wonderfully assured confidence. William Dawson’s classic arrangement of Soon ah will be done was made to sound fresh under Koza’s direction to finish the first half.

The live and lively auction followed with what seemed to be enthusiastic financial support for the Camerata Singers and Futures programs. Then, even with the solid programming of the first half, Koza still had a few more stops to pull out. Another of William Dawson’s classic arrangements, There Is A Balm In Gilead, featured Julia Turner as soloist. Turner “owns” the music she sings in no uncertain terms providing the vocal balm and exquisite phrasing. Pilgrim Song by Ryan Murphy was a tour de force for singers and accompaniment. Troia’s piano never wavered in the underlying flowing accompaniment current to be swept along on this musical journey. The full out dynamic of the fifth verse pulled the audience toward a stunning ending that just hung in the air. There was more than one audible WOW from the audience! A tough act to follow but Soft Day with music by Daniel Brinsmead, a young upcoming composer on the scene, elicited a brief glimmer of Copland in the introduction then evolved into an openness and gentility of description of rain scent, sound, “soaking grass…crushed by my two bare feet…” The effect both vocally and piano of the “rain drips, drips…” could not have been more evocative. Rounding out this thoroughly delightful afternoon was Mark Hayes arrangement of Walkin’ Down That Glory Road inviting the listener to say “goodbye to (my) sorrow…and just keep walkin’.” Koza continues to program repertoire that is challenging for the singers and goes beyond mere entertainment for the audience.