END_OF_DOCUMENT_TOKEN_TO_BE_REPLACED

May I begin by reminding the reader of how festive a live concert band, notwithstanding the limitations of beginning and intermediate student musicians, can be. However perfect professional orchestras might sound, they can be hard pressed to match the heartfelt energy and enthusiasm of a community or student concert ensemble. Such was the case today at the Cabrillo College Spring Festival of Bands concert.

END_OF_DOCUMENT_TOKEN_TO_BE_REPLACED 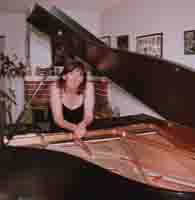