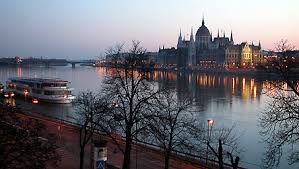 The Hungarian musical heritage had its evening in court Tuesday, August 5 at The Center for Performing Arts at Menlo-Atherton, the Concert Program VII from [email protected], which concluded with a spectacular reading of Ernõ von Dohnányi’s Op. 1 Piano Quintet in C Minor (1895). Works by Liszt, Kodály, Bartók, and Ligeti supplemented the Dohnányi opus, all of which extended the gypsy-Magyar tradition in each composer’s unique and romantically individual style.

Franz Liszt set the virtuoso tone for the program with his infrequent 1835 Grand duo concertante for Violin and Piano, a free-wheeling fantasia and series of variations based on a minor tune by French violin phenomenon Charles Philippe Lafont. Benjamin Beilman, violin and Gloria Chien, piano did the bravura honors, after a false start involving a faulty I-pod. Mostly in A Major, the piece exploits Liszt’s penchant for rhapsodic forms, especially in the matter of improvisation, which had Beilman’s violin soaring and Chien’s keybord glistening. Any number of rhetorical flourishes defines this piece; and its Finale: Animato marziale, simply refused to end, having exhausted us with innumerable anti-climaxes. Nonetheless, when Beilman and Chien rallied off the last, explosive runs and fioritura, the audience leapt to their collective feet with delirious huzzahs.

Twelve of Béla Bartók’s 44 Duos for Two Violins (1931) provided excellent collaboration for violinists Jorja Fleezanis and Alexander Sitkovetsky. Whatever Bartók’s Mikrokosmos accomplishes for the keyboard pedagogy for Hungarian and Magyar folk music, the 44 Duos attempt for the violin, a combination of instruction and lexicon in national dance-forms, mainly in Bulgarian rhythm. The array of effects – bagpipes, hurdy-gurdy, cembalom, flute – range from peasant sources to exotic, regional sonorities from Ruthenian, Polish, Lithuanian, Czech, and Romanian sources, embellished by Bartók’s febrile imagination. In the midst of etched, heavy-footed regional dances, like the Forgatos, we could hear Bartók’s eerie, detached “night music” sequences, which lend a special atmosphere of angst and beauty, at once.

The string sonority continued – but happily, in a brighter mode – with Zoltán Kodály’s Serenade for Two Violins and Viola, Op. 12 (1920). Principal Paul Neubauer, viola joined his violin colleagues, Alexander Beilman and Alexander Sitkovetsky, and their collective “symphonic” sound proved utterly ravishing. Utilizing a modal and gypsy harmonic system, the work provides an aerial, fanciful freshness, irresistible. Paul Neubauer’s hypnotic viola tone had ample space for its especial magic, complemented by lively, triple meter sonorities from the violins in the opening Allegramente. Beilman provided a nervous tremolando for the second movement Lento, ma non troppo, while his two mates made exotic colloquy. The last movement, Vivo, continued long enough and with numerous asides, to constitute an independent composition of considerable elan and bravura virtuosity. This piece, too, indulged us in an exuberant last page that literally had the notes flying off the page and the audience flying from the seats.

After the intermission, cellist Narek Hakhnazaryan – winner of the Gold Medal at the 2011 International Tchaikovsky Competition – appeared in the Sonata for Solo Cello (1953) by György Ligeti. Perhaps the most intensely subjective piece of the evening, this rare, gripping work of under ten minutes’ duration had the benefit of the artist’s 1698 David Teccler instrument, which Hakhnazaryan played – like Herbert von Karajan’s conducting – with his eyes closed. Conceived in two movements composed 1949 and 1953, respectively, the sections Diologo and Capriccio provide extreme and rich contrasts. If etched and ardent melody defined the first movement, whirlwind virtuosity – in full desire to pay homage to Paganini –marked the second, rife with blistering sixteenth notes that – ineluctably – blew the audience up and away in raptures. By the way, this astonishing talent had already impressed me in his variation in the Janacek Concertino on Tuesday night.

The final work filled the stage with five musicians consistently alert to each other’s playing and perfectly balanced in sound and temperament: piano Wu Han; Alexander Sitkovetsky and Nicolas Dautricourt, violins; Paul Neubauer, viola; and David Finckel, cello. Most of Dohnányi’s Piano Quintet, Op. 1 remains a Brahms derivative, cross-fertilized by Bohemian and Magyar energies. In the last movement, Dohnányi succumbs to that academic temptation to write a fugato, the theme in Tchaikovsky’s 5/4, and the ending a cyclic iteration of movement one; so we have Beethoven, Schumann, Liszt and Franck in the creative mix. Still, the work remains a melodic and rhythmic tour de force, especially in the composer’s (Brahmsian) tendency to employ hemiola, or metric slides, to alter the pulse of the music. More power to both Sitkovetsky and Neubauer for their rich contribution in the second movement Adagio, and cellist Finckel’s warm tone throughout. Wu Han provided the very model of keyboard accuracy, clarity and refinement, quite conscious of her dynamics, which could fill the hall when required.

And at the last resounding chords of the coda? – guess – a raving lunatic explosion of audience appreciation.

Archived in these categories: 20th Century, 21st Century, Chamber music, Romantic Era, Strings, Violin.
Bookmark this page for a permalink to this review .