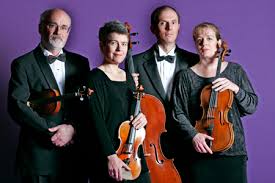 The final concert of the Carmel Music Society’s subscription season was given in All Saints’ Church last night, Friday, May 10, 2013, by the Lydian String Quartet together with guest cellist, and founding member, Rhonda Rider. The season’s remaining event is the free competition weekend at Sunset Center, with a recital by last year’s vocal winner on the evening of May 31, and this year’s piano competition all day on June 1.

Last night’s concert was also final in another sense – CMS plans to hold future concerts of this series (originally presented by the Mozart Society of California) in Sunset Center rather than in All Saints’ Church, to improve access for older patrons. Thus it was a good time for the audience to show by the extra warmth of their applause that they appreciated not only the present concert, but also the many fine performances that they had heard in this ideal acoustical environment over the last several years.

The performers rose to the occasion with strong playing throughout their program of Boccherini, Mozart, and Glazunov. Particularly notable was the centerpiece of the evening, Mozart’s D-minor Quartet, K.421, the one undisputed masterpiece on this enjoyable program. It was clear that the players truly loved this work and really enjoyed performing it. This has not always been the case with other ensembles offering an obligatory Mozart piece, which was expected in every concert in the Mozart Society series.

Right from the start of this quartet, the Lydian players made it clear that they were taking a more vigorously masculine approach than usual in this much-recorded work, making it brisker, more actively cerebral, and less atmospheric. The early exposed trills were beautifully executed, as were the rapid triplets – whether on repeated notes or as sinuous decorations. So were the alert imitations that followed. The second subject, emerging in the relative major, which changed the mood and the balance of the whole movement, was very satisfying. In the other movements, Mozart succeeds in finding ample variety, despite the second and third movements both having rather similar tempi,  and with the second and fourth movements both being sets of variations. The theme of the second movement Andante is unmistakable due to its having a gulp of a rest after the first note, in whichever guise it appears. The assertive minuet, with its dotted rhythms in the minor, was well contrasted with the lilting, skipping, major mode of the trio, although here the imagery of dancers on their toes could have been given a more gracefully feminine interpretation. The finale went well, with its lively 6/8 theme and dotted rhythms, right until Mozart’s expected final diminuendo and throwaway ending with a falling, fading octave, then nothing. Instead we were treated to a long and loud unison on the last note, and a synchronized flourish of bows. So, in the end, the scales tilted much too far to the masculine side. Although it was refreshing to hear a different approach at the start, there was not quite enough of the minor wistfulness lurking throughout.

Discussion of the essential but elusive masculine-feminine balance in Mozart has added relevance for the Lydian Quartet, whose style may have changed over the years, since they began in 1980 as an all-female quartet, and now have only one surviving lady, the fine second violinist Judith Eissenberg.

One of the popular ways of turning a string quartet into a string quintet is to add a second cello, and we heard two works in this genre. Boccherini’s E major Quintet, Op.11 no.5, is known mostly for its third movement Minuetto melody, with its turn and syncopations and echoes, which has been arranged for almost all conceivable instruments. In violinist Daniel Stepner’s hands, it was as effective as ever, played over pizzicato in the lower strings. The first movement had charmed with its mellow nods toward the baroque, and the bright forthright second movement gave both of the cellos and the viola good solo opportunities. It was only the solid finale that seemed an anticlimax after the divine Minuetto, and prepared us for the quantum jump in class to the Mozart that followed.

Glazunov was a most accomplished composer and teacher, who usually earns our respect without quite achieving memorability. But his A-major Quintet, Op.39, must rank high in the canon of works in this medium, maintaining a level of melodic invention and warm sonority that carries all before it. It was as enjoyable to listen to as it must be to play – which is half the battle in chamber music. The rhapsodic beginning sets the tone, with the quartet’s newest recruit, Mark Berger, playing a well-projected viola solo, soon followed by each of the cellos, Joshua Gordon and Rhonda Rider, whose solos were to die for. A central section with virtuoso playing from Stepner and impressive accompaniment, grounded in chords from both cellos, had the scale of a violin concerto, and the brilliant coda led to a unison ending, where, as throughout, the homogeneity and intonation were excellent. The scherzo that followed made airy use of high pizzicato triplets, with a trio that achieved a quite different effect with pizzicato restricted to lazy low notes in the two cellos. The finale used a rustic Russian dance tune, interleaved with reminders of the first movement, before accelerating to a triumphant close.

A worthy conclusion to the Mozart Society concerts at All Saints’ Church, with thanks to all concerned!

Archived in these categories: All Saints' Church, Carmel Music Society, Chamber music, Classical Era, String quartet, Strings.
Bookmark this page for a permalink to this review .